shipping routes from China to USA

Therefore, the Mason regular ship is almost unaffected during the peak season and can maintain the stability of the entire route.Xiongda is the forwarding agent of Matson Shipping.

CMA CGM’s EXX shipping is APL’s boutique service of the Eagle Express X (EXX) shipping routes from China to USA, an 11-day direct sailing to Los Angeles. This issue of CMA CGM is also very popular, and it is the first shipping company to propose not to raise prices for the time being.

CMA CGM officially announced that it has decided to stop all spot price increases!
Time-sensitive shipments are marked “Priority Shipment” on the CMA EXX Express and are backed by a money-back guarantee.Xiongda is the forwarding agent in China of CMA Shipping.

WHL Shipping is a subsidiary of WHL Shipping Group, which is the largest shipping company in Asia, with the most intensive voyages and the most complete service network in Asia.

It only takes 12 days for the ZIM Shipping to go directly to Los Angeles, USA. The large ship is unloaded within 12 hours, and it can be picked up within 10 working days after the ship sails. It can be quickly connected to the railway to other destinations in the United States, such as: Chicago, Memphis, Dallas, Kansas and New York.

Once launched, it is a superior shipping routes from China to USA. 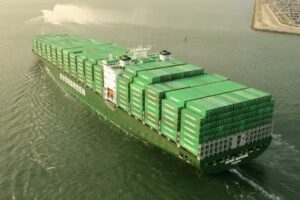 EMC Evergreen Clipper, as one of familiar shipping routes from China to USA from , plays a very important role in transportation across the Pacific Ocean. As a shipping company for more than 20 years, Evergreen Shipping has fixed shipping routes in more than 80 countries, and its strength is beyond doubt.

As the Southern Clipper, before ZIM was launched, it undertook most of the fast-shipping business in South China.

Evergreen is 13-15 working days for pickup. The biggest advantage is that it has its own dedicated wharf, so there is no need to worry about the port congestion and wharf congestion during peak seasons.

Maersk is primarily targeting big sellers. If Maersk does not make a move, it must be extraordinary! Exclusive self-operated fleet, anchored at its own wharf.

Maersk’s shipping routes from China to USA has all the features of the cross-border e-commerce “Clipper”:

1. Target the lucrative high-end market
2. Exclusive management
3. Few ports of call
4. Use small and medium-sized container ships to achieve the shortest sailing time
5. The trump card: the destination port is anchored by its own wharf.

Air Transport From China To The US | How Much Does It Cost?-Xiongda

What About Sea Freight Shipping From China To USA ?-Xiongda

At present, international freight forwarding company is already an important part of cross-border e-commerce. Without the assistance of international freight forwarding companies, the process of shipping from China to USA is difficult to proceed smoothly. Therefore, the service provided by the logistics provider not only has its own channel advantages and strengths, but also sometimes